Leo Lohwasser was born 8 January 1890 in Hirschenstand, District Neudek, Bohemia, Austrian-Hungarian Empire, the last born in a family of 8 children.
Unfortunately his military record doesn’t exist anymore, but according the conscription law of the empire, all young men at the age of 21 had to do their military duty. Nevertheless just 30% of the conscripts served the regular 3 years. Some were never called and some others did just a 8 week basic training. What kind of duty Leo Lohwasser did is unknown, but he joins the k.u.k. Army in 1911. 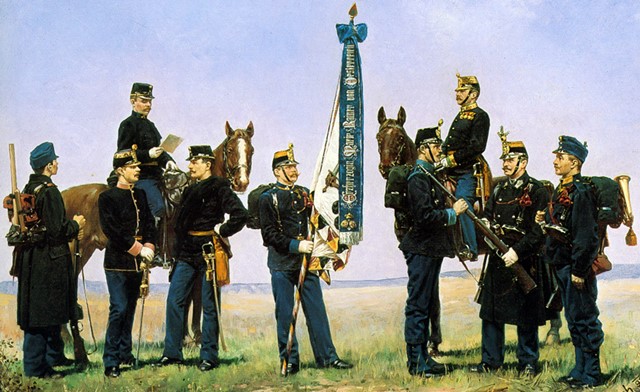 The land forces of the Austro-Hungarian Empire were essentially composed of three separate armies: the common army, which was recruited from both the German and Hungarian portions of the empire, the Austrian Landwehr, which was recruited from the so-called German provinces of the empire, which in practice contained Poles, Ukrainians, Slovenians and Czechs and the Hungarian Landwehr (Honvéd), recruited from the Hungarian administered provinces of the empire. It should be stressed that the latter two organizations were in no way second line or militia forces. Its members, like those of the common army were either professionally enlisted soldiers or conscripts performing their military obligation in the normal fashion. The existence of three separate forces was a throwback to an earlier political decision of 1867 in which the right was conceded to the Hungarians to raise and maintain their own armed forces. This force was known as the Hungarian Landwehr (Honvéd). A similar balancing force was then raised in Austria and named the Landwehr. In practice, during wartime all three forces fought side by side together, 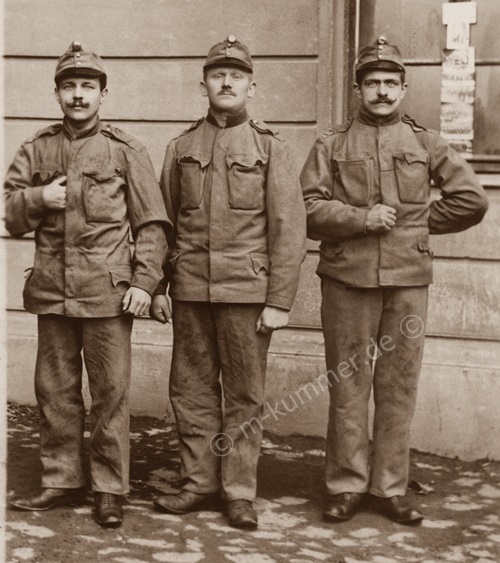 the only difference actually being the nomenclature of the individual regiments. The regiments of the common army were designated "Imperial and Royal" - kaiserlich und königlich or k.u.k. The Austrian Landwehr regiments were titled "Imperial Royal" - kaiserlich königlich or k.k. Finally the Landwehr (Honvéd) were styled "Royal Hungarian" - königlich ungarisch or k.u..
The k.u.k. army used the territory recruiting system. Due to this, the regional regiment for Leo´s district was the k.u.k. Infanterie Regiment 73 “Egerlaender”. In 1911 the Regiment was deployed in Prague and Leo was doing the basic training there. 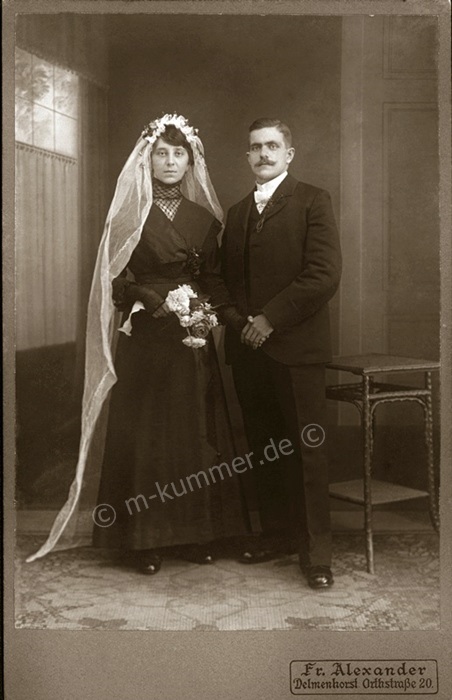 Leo married Marie Doberauer in Delmenhorst (Germany) on 6 September 1913. Marie was born in Bleistadt, Bohemia in 26 April 1889 and her family moved to Delmenhorst about 1897. Leo's family had moved to Delmenhorst in about 1893. They had two children Leo and Adolph born in 1910 and 1912 before they married. The fact that Leo married in Germany in 1913 shows that he was no longer an active soldier of the regiment 73, but he was still in reserve duty for the k.u.k. army.

When in August 1914 World War I started, the Austrian-Hungarian Monarchy called the reserve up. All young men (all over the world – even in the USA) had to report to duty at their appropriate regiment. Leo was allocated to the 3rd Company of the Infantry Regiment 73. He fought with his regiment at the Russian front line.
On 28 July 1915 the regiment fought in the area of Sokal (nowadays Ukraine) against Russian infantry and artillery. This day became a “black day” in the regimental history. During the fight the Russian troops broke into the k.u.k. frontline and the Austrian soldiers had to fight for their pure lives! Strong thunderstorms, heavy rain, no munition anymore and Russian fire from each direction led to chaos among the k.u.k. troops. The officers could not control the defense anymore and lost many men.

Around 450 men from the 1th, 3rd, and 4th company where captured by the Russian Army in this battle. They were transported to some prison camps in Siberia, Russia, as prisoners of war. However, at some time during Leo Lohwasser's imprisonment, Russian farmers in the region of Krasnoyarsk requested that prisoners be made available as farm labor. Leo went to work on a farm where he was treated well, like a member of the family, but slept on the floor as did many others in the family. Leo and his fellow prisoners would often tattoo themselves by forcing coal dust under their skins with needles out of sheer boredom. These tattoos were on his wrists and arms until he died.
After many years as prisoner he got a chance to join the Czech Legion. The Czechoslovak Legion was a volunteer armed force composed predominantly of Czechs and Slovaks fighting together with the Entente powers during World War I. Their goal was to win the Allies'

support for the independence of Bohemia and Moravia from the Austrian Empire. Although there was a need to increase their fighting power and mobilization was officially announced, no Czech or Slovak prisoner of war was forced to serve in the Legion, but many joined them and some “German”-Austrian-Hungarian soldiers as well. The political situation changed after WW I and the Bohemian territory was now the Czechoslovakian Republic. Some of the former Bohemian German´s chose to join the legion and return home with them. 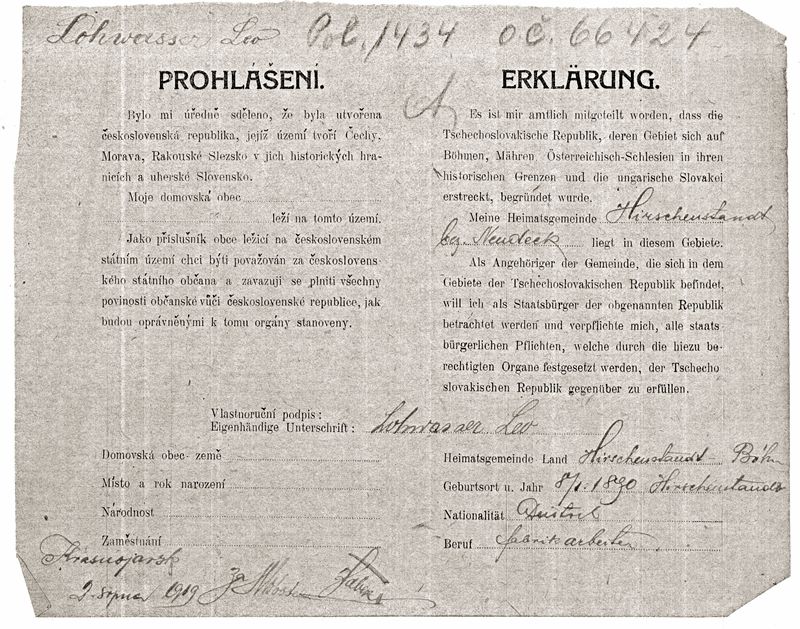 As documented in his Czech military records from Prague, Leo became a Czech Republic citizen in summer of 1919 and was conscripted into the Czech Army 3rd Division while working at the Czech military field hospital in Krasnojarsk.

The Czech Legion had secured the Trans Siberian Railroad in that area by that time and by early 1920 they were all transported by rail to Vladivostok. With the help of the American Red Cross (12 American and 9 English ships), most of the Legion – totaling 67,739 soldiers – was evacuated via Vladivostok (some 3.000 miles away) and returned on different ways back home to Czech Republic. Leo boarded the USA transport ship Thomas which sailed from Vladivostok on 20 June 1920. With 2087 soldiers aboard, the Thomas sailed around the China and Indian coasts, through the Suez Canal and landed in Trieste on 8 August 1920. Trains arrived at Trieste on 13 August 1920 to take the soldiers to Prague where it is likely Leo was discharged from the army.
Leo returned to his family in Delmenhorst, Germany and immigrated with his family to the US in July 1923 arriving at New York City with a Czech Republic passport. Later, he began work at an automobile plant and eventually became a beer maker at the Stroh Family brewery in Detroit. He died in 1968.